Join us on social media networks for the very latest announcements, contests, new dishes, and coupons!

Explore our menu, order online, and pay ahead with our app! Available for iOS and Android. 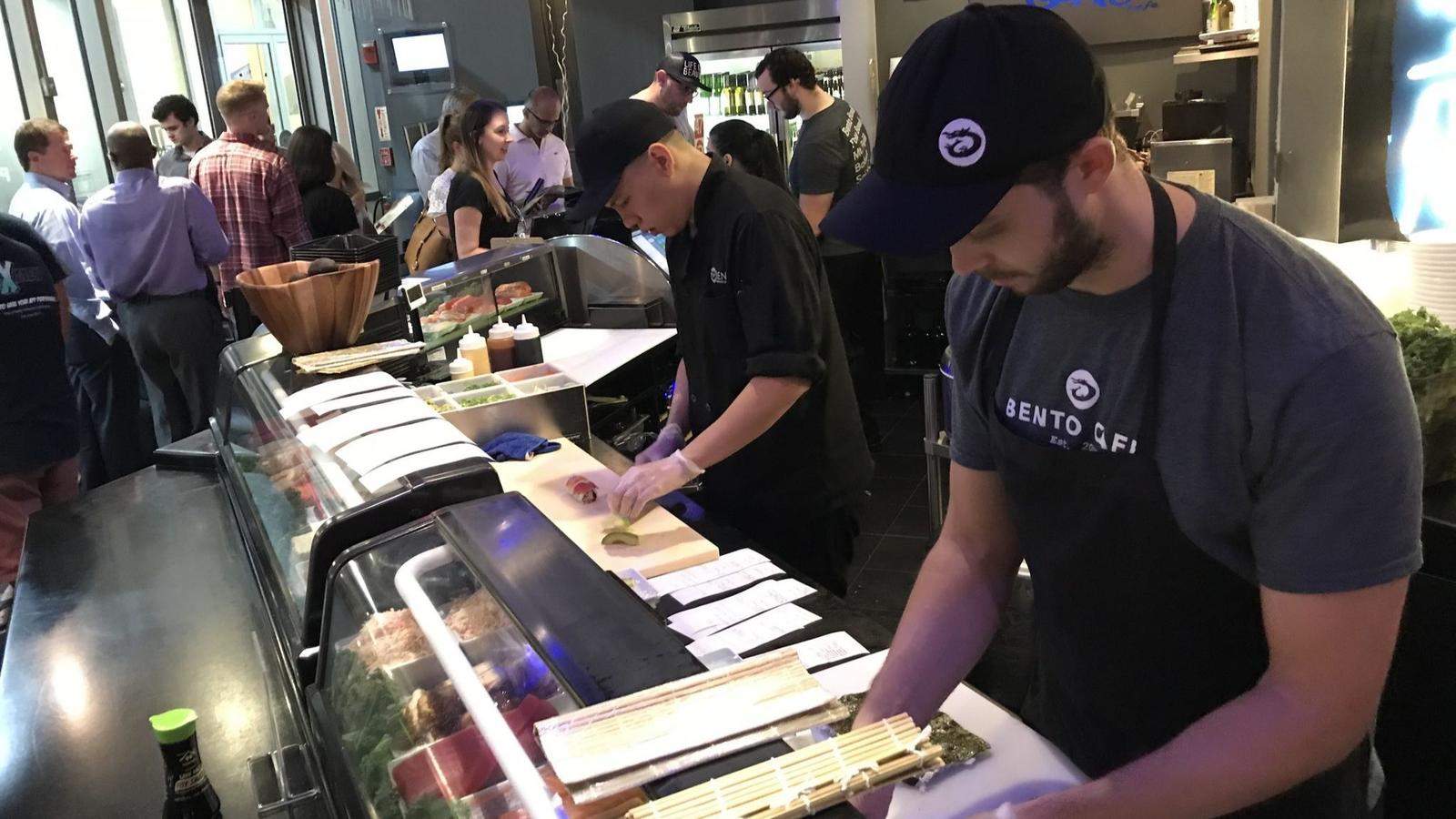 Bento Cafe’s downtown is packed during lunch hours with customers lined up to the door to order sushi, bento boxes and rice bowls.

It’s just one of nine locations in Florida for the Orlando-based company, which plans to nearly double its footprint by next summer and start expanding outside the state.

Jimmy and Johnny Tung, brothers and owners of the company, are trying to turn their regional “Pan-Asian” fast casual restaurant into a Florida staple. Instead of focusing on one cuisine, Jimmy Tung says they want to offer the best dishes from across Asia. That’s why it serves a collection of choices from the Pacific Rim, including pad Thai, poke bowls, General Tso’s chicken and boba tea.
“I think we want to give a little bit more variety because in Taiwan we have a great melting pot of all Asian cuisines,” said Jimmy Tung. “We are trying to bring that to the states.”

By next year it should have eight new locations, including a flagship restaurant on East Colonial Drive near the Mills 50 District and a spot in Winter Park. Other new restaurants are coming to Jacksonville, Tampa and South Florida. They also are looking at new restaurants in Lake Nona, at the Jimmy Buffet Margaritaville Resort in Osceola County and Atlanta.

“The goal is to start opening 10 or 15 new restaurants a year,” said Johnny Tung, 38, who handles the business side of Bento Cafe and parent company Bento Group.

“There’s plenty of potential in Florida,” Allen said. “But where restaurants sometimes get off track is if they suddenly try to open somewhere far away, like Birmingham, Ala. They outgrow their infrastructure.”

That growth is one of the reasons the Tungs are building the new headquarters building on Colonial Drive, which will be behind the Mills 50 restaurant.

It will have room for a test kitchen as well as offices for payroll, marketing and other operations that were run on a restaurant-by-restaurant basis until now.

“We needed somewhere we could have a support team and do payroll for 550 people,” he said. “When you get big enough, it doesn’t make sense to do that anymore.”

Still, they have no plan to bring on franchisees or development partners, stressing they are running all the restaurants from South Florida to Jacksonville.

The brothers’ passion for restaurants comes from their late father, Steve, who moved from Taiwan to New York City in the late and worked in a handful of Chinese restaurants.

The family moved in 1980 to Gainesville, where Steve Tung opened another traditional Chinese restaurant. They worked at the family restaurant while attending the University of Florida. Together, they started Bento Group in 2002 in Gainesville, with sleek, modern decor and a variety of dishes drawing from across Asia.

“We wanted to “do something more modern and casual than the traditional, old Chinese restaurant,” said Johnny Tung, who was born just after his parents and older brother arrived in the United States.

After catching the attention of college students with two locations in Gainesville, they moved to Orlando in 2008 and expanded to nine spots from Jacksonville to Davie. They’ve also opened a handful of other restaurants in Orlando, including Chela Tequila and Tacos, Avenue Gastrobar and Sticky Rice Lao Street Food.

But the Tungs’ focus is on expanding Bento Cafe in Florida to fill a niche in fast-casual Asian cuisine, which has only a few major national players, such as Panda Express and P.F. Chang’s sister restaurant Pei Wei.

A narrow menu of the most popular Asian dishes has helped them succeed where other concepts have struggled, Johnny Tung said.

“You can try to go authentic and serve a huge number of dishes from one country,” said Johnny Tung, who owns the company with his brother Jimmy. “Or you can try to pick the most popular foods from around Asia, the foods you know people love and try to do that really well.”